In Her Own Words… Interview with a London Call Girl

This short publication is the unedited transcript from a video interview I undertook with a woman working as a London call girl in the late 1990s. It is an enlightening and moving, firsthand account of a woman’s life affected by prostitution, exposing the emotional, psychological and social effects. I have made it available to download from Amazon, and as the woman interviewed, referred to as Q, is no longer alive, all royalties are donated to Beyond the Streets, a charity working to end sexual exploitation. 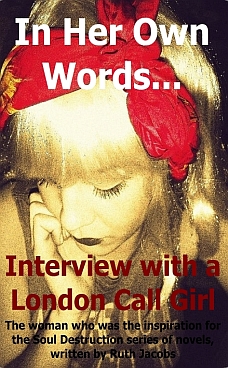 This charity publication and the cause is very close to my heart, more so because the woman I interviewed was a very dear friend, a wonderful person, and who had a traumatic life, suffering childhood sexual abuse and then being pimped on the streets from the age of fifteen.

The stigma some of society has against women in prostitution is mainly through lack of knowledge. 75% of women in prostitution have been sexually and physically abused as children, 70% have experienced multiple rapes, and 67% meet the criteria for posttraumatic stress disorder, which is a major cause of suicide.

I am one of those women and with my late friend’s words, I hope to show the reality of life for many of us who have sold or do sell sex, the effects it can have on us psychologically, emotionally, with relationships with men, how we are viewed and how we feel we are viewed by society as outsiders and outcasts, often judged and looked down on. I hope this will go some way to change erroneous beliefs about us and I hope I live to see a day where there is no stigma attached to women who are or have been in prostitution.

“Read it because she sounds like an interesting person; because it will make you cry for her and admire her; and because she describes a slice of female experience that is all too common and all too little discussed.” The F-Word

“I urge anyone to read this woman’s story even if you feel well-informed in this area. Q’s words and the feeling behind her words are moving, violent, graphic and painful. They come from a place of lived-experience and honesty. Too often are voices such as hers ignored and marginalised.” The Other Side of the Apple

“The popularity of Secret Diary of a Call Girl was a very good example of the current societal tendency to push us towards accepting prostitution as a job which is taken through choice and which isn’t a high-risk, abusive and traumatic way to earn a living. I was pleased to find Ruth Jacobs’ publication shows an experience that details the starker psychological complexities of working in the sex trade and that we hear the interview verbatim from the woman concerned, In Her Own Words.” Writer, Kate Kerrow

“In Her Own Words is an extremely frank account of the complex psychology involved in selling sex.” Nicole Rowe, Feminist Me Up